So this is it, my final review of the last few weekends, and now Carnage. Again this event is not a WAAC tournament, but a nice friendly arena to play lots off 40k games. The set up was 4 games at 1250 on the Saturday, followed by 3 at 1250+500 (1750) on the Sunday. The second list had to include the first list with no modifications.

So here are my lists:

and here is a picture: 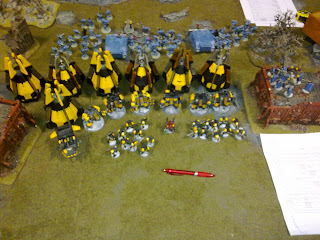 the only reason i took this list is that i like playing with Dreads, and I like Drop Pods. i was hoping to get 2-3
Wins and not get too blown away by any "power" lists.

Game 1: was against a 7 model grey knight list, Draigo, 2 Paladins, 2 Venerables, and 2 Dreads. unfortunately for this guy he only had 2 fist on his verneables that could hurt me and in the end even though I was locked in combat with paladins with a 2++ I eventually killed all his army apart from Draigo who was on 2 wounds. A good start.
Game 2: next up was a team England player. At the last Carnage I played him in my first ever competitive game and he just beat me. Looking back at the list I took then no wonder! again I was not too hopeful as he had brought a fully tooled up Space wolves list; Logan, Wolf guard some with terminator armour, 2 lone wolves, long fangs and 2 grey wolf squads. This was 5 objective and spear head. The idea was to drop in and take out the grey wolves and use my pods to hold him back. I was aiming for a draw. In the end my plan failed due to poor shooting when required I only just got beat. If I had noticed the time then on my last turn instead of shooting the scouts I could have moved them on to my objective and sneak a 1-1 draw but I didn't and lost 1-0...close
Game 3: daemons...I have never like playing these and it was a diagonal setup and capture and control. I held my scouts in reserve ready to outflank as the objectives were close to each board edge. I maybe could have got a win if I had been a bit more daring, but I played safe and backed up my scouts on an objective and got a draw.
Game 4: Space marines which had a little bit of everything...but by the end not much of anything. All he had left was a stubborn scout who would not die, despite all the shots on him and an immobilised vindicator. A strong win
So at the end of day 1 I was 2-1-1, and was more than happy. One more good game tomorrow and I would have the result I wanted.
Game 5: Necrons. His list was mainly all the older models and he didn't have any of the new stuff, but having played against this type of list recently I knew what to do. It was capture and control, pitched battle. He set up 3 squads near his objective and played very defensive all game. My scouts got wiped out by his scarabs on turn 1, so 4 dreads had to drop in and deal with them straight away. One of my tacts dropped on my objective and sat there; while an ironclad and another dropped near his on the last turn I was able to contest his and won!
Game 6: Space wolves, kill points dawn of war. The worst combination for my list and against another elite space wolf list. There was not much I could do or play differently and got tonked 9-4 in KP.
Game 7: Space Marines, terminators Kantor but only 2-5 man tact squads. My first turn I was able to pop a razorback and a landraider, but again attrition took its toll and I was unable to bring enough firepower to kill things quickly. Luckily he also had heavy losses and he only had left Kantor while I had a scout squad on an objective. Another win!
Final score was 4-1-2, 140 ish points and 6th position.
Over all the squad of the weekend were the scouts. Other than 1 bad game they were brilliant; causing pinning checks and even the odd glance or 2 on light vehicles. The list was surprisingly solid but did come unstuck at times against top tier list. I got beat in game 2 by the winner, beaten by 4th place and drew with 5th. Would I have done better with my dual raider Vulkan list? Who knows but I doubt I would have has as much fun.
Posted by toonboy78 at 08:43