Well after a long break since my last post I thought it was about time I updated everything I've been working on. So here you go!
Cast your minds back to christmas, the best time to be thinking about what projects to start, as if you've been a good boy, Santa Claus might bring you some nice new shiny's!
With my mind focused on the most excellent Spiky Clubs, up and coming SVA Tournament, I was keen to be ready as the last year I was painting right up to the last second.
The last time I took my orks so this time I wanted to take something different for 2 reasons.
First of all I wanted to take something more competitive as although my list previously wasn't terrible, it wasn't really picked to smash the opposition to bits. So I'm flicking through various Codex' for inspiration & what I'd need to make a competitive Tournament Army. I asked myself "Whats a really competitive (cheesy) army that is quite forgiving and means I won't get my ass handed to me like last time?"
"DOUBLE LASH"........oooh thats a bit cheesy I thought.........oh well....
Ok so I wasn't going to make any new friends but hey, friends are overrated ;-)
So with no apologies intended, I went for the following ballbusting, no god preference, beast of a cheese list: -
Chaos Space Marines 2000pts List
2 Daemon Princes (Mark of Slannesh, Double Lash, Wings)
Greater Daemon
7 Nurgle Plague Marines (Champ - Powerfist,Melta) 1
Rhino (Extra Armour)
7 Nurgle Plague Marines (Champ - Powerfist,Melta) 2
Rhino (Extra Armour)
7 Nurgle Plague Marines (Champion) 3
Rhino
8 Khorne Bezerkers (Champ - PW)
Rhino (Extra Armour)
3 Obliterators
3 Obliterators
Defiler
The 1500pts version was without the defiler, greater daemon and nurgle/rhino squad 3 & the Oblits are split into 3 squads of 2.
SIMPLES.
So Crimbo came and I hooked myself up with 2 brand new swanky daemon princes and a couple of rhinos and I was ready to start building and painting.
I began painting straight away but with a January 31st honeymoon to Australia for 4 weeks lined up, that was obviously the deadline date. Well as my fellow bloggers will testify, I wouldn't be me, if I didn't leave it all to the last minute. By the deadline date, to give myself credit, I had completed most of it but still needed to finish off a nurgle squad & a rhino. I then decided, after contracting a heavy dose of painting fatigue, It would be best finished when I got back from Oz, and it was.....the night before.....till 6:30am in my pants!!! Suffice to say, the boys weren't too impressed or really surprised for that matter! But hey, all done in the end! Still a little sketchy based on the time frame but I can always go back in and finish them off another time, as long as they were tabletop ready I was happy :-)
So heres some of the latest additions mostly finished: -
Converted Obliterators 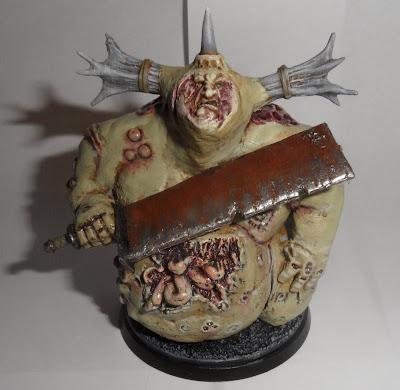 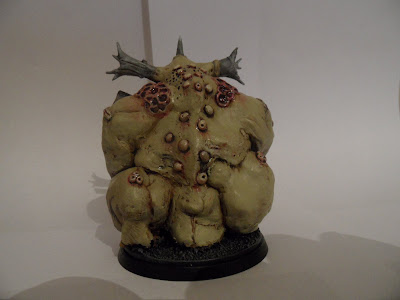 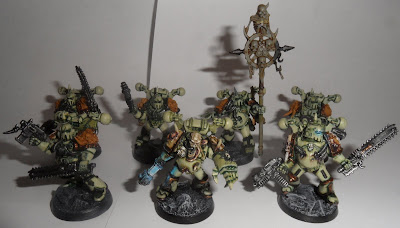 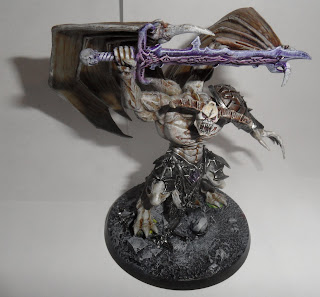 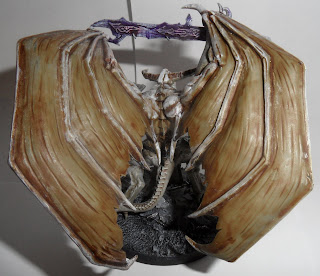 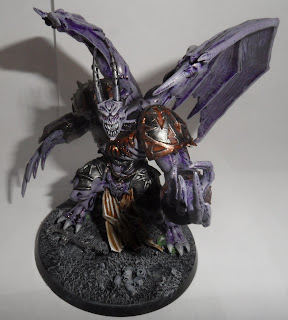 Well theres just a handful of images to look at for now but i'll post up some more this week. I'll post up a couple of battle reports from SVA XII and how the Double lash got on at the weekend. I'll also post the start of my next project which I plan on starting this week -
The Sanguinary Guard Army
Take it Easy
Luko
Posted by Luko Dakka at 00:19 1 comment: