Hi, I am Hypaspist, and welcome to my first post (oohh the excitement!)

Let me get right down to it.

As Mike has mentioned, a group of us are going along to SVA X in Reading at the end of April, and I have decided that it would be a great, nay fantastic idea to start a new army...

With just over a month to do it in...

I like 'making', in fact, I like it so much that I have a tendency to have more stuff unpainted than painted at any one point in time, anyone who knows me can attest to the fact that I suffer Heavily from SNMS (Shiny New Model Syndrome)

This is a terrible affliction that causes you to rush out and purchase things before you have finished the last project and as a result I have countless unpainted models including (but not limited to...) Dark Angels, Sisters of Battle, Inquisitors, and many more.

AS I like building things, and I like my conversions and scratchbuilds, I decided that it would be rather good fun to follow the Deffskullz idea, after all, if it isn't bolted down, and it looks shiny enough, they will find it, pinch it, and improve it (?!)

I wanted to stray away from the traditional ideas, and go bith a Big Mek as my leader.
as There is *Nothing* that can convince me of any weapon more Orky than a Shokk Attack Gun this was also a stipulation, and thus after 3 evenings sat chopping up an Assault on Black Reach Warboss and some entirely random bits from my bitzbox, (including the insides of a looted Ethernet Cable) 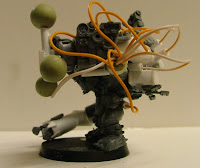 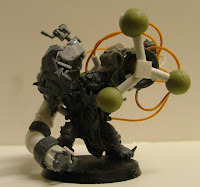 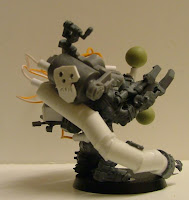 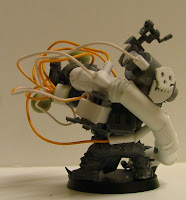 So, I started off with a AoBR Warboss. I chopped off his Klaw arm at around the elbow, and re-attached this on the other side. I then proceeded to haphazardly slice some plastruct tubing in order to curl around his body, very much like the official GW model does.
Chopping up the innards of an Ethernet cable I then proceeded to (basically) stick them *everywhere* including his head.
After all a Proppa Klever Mek doesnt need Levers, 'e just finks where to shoot and it goes bang!

I tried also, to re-create the tri-spinny front of the Shokk Attack Gun with milliput (rolled into balls and smoothed with water, which I then drilled and pinned. glueing the pin into a section of plasticard tubing, which was then secured via some more plasticard, to a rough frame to get the effect you can see in the pictures. a bit fiddly, but I am very happy with it.

I then added a fuel tank, some levers, some plating, an the legs of a snotling being sucked up the tube to create the overall effect.

Thats enough for now, but next up the Big Mek has some big ideas!
Posted by Hypaspist at 20:46 No comments:

Signed up to play in SVAX Campaign

Having recently reached a landmark birthday i decided i must try and do some new things! Well as if by magic Hypasist (fellow author and code 40k player) invited me to go to SVAX. This is a campaign weekend run by the Spikey Club on the 24/25th of April. I have never been to any arranged tournament before. So to cut a long story short ive accepted.

For anyone else who might be interested it's in Reading (UK). This is the link to the rules pack:

As it also happens Luko Dakka is also attending the event and we will be publising our progress to the event and how we got on in the event.

So my list of work to do for my space wolf army before the event includes:

Thats all for now pictures coming soon of the above in progress!

The Beginning
So its been a while since my last post but thats because Papa Nurgle has had me slaving away on more pestilent carrying disease bringers!
Death Guard Space Marines
First off it was time for prep work to begin, I got the Forgeworld sprues out and did the neccessary trimming.
For any first timers to forgeworld kit - it does requires a hell of a lot of tidying up. Get your snippers, file and a ho bby knife and go to work. Once you've done the tidying up you then need to give it all a good wash, I used a bit of cif in some warm water and gave them a careful scrub with a toothbrush. You may think this is a bit extreme but if you don't, you'll find that when you come to base coating the bad boys the paint won't take, so don't miss it out!

*Don't forget to put the sink plug in when your cleaning! Last thing you want is £20 sprues flying down the drain!*
Once I'd done all that it was time to snip off and clean the marine boxed set for assembly. I decided I wanted my Deathguard to be carrying predominantly chainswords and Bolters not bolt pistols just because I think it looks cooler. I was gonna do a few arm manipulations and alternative poses to make them look that little bit different as well. Heres a selection of them.

More twisting arms and wrists, a couple were pinned to keep them solid
I also slapped them on some new bases I purchased fom Ebay, "Doc" pointed me in the direction of these resin slate bases and were very reasonably priced from a company called "616 Designs" thoroughly recommended by the code40k I would say!
Right with these finished it was on to the Termies -
Death Guard Terminators
Well I'll jump straight to the builds, there was quite alot of intense cleaning needed and the shoulder pads had been slightly damaged on delivery but nothing major.
I cleaned them up and heres the result 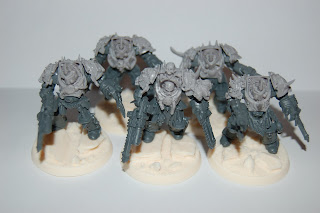 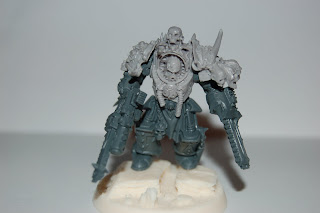 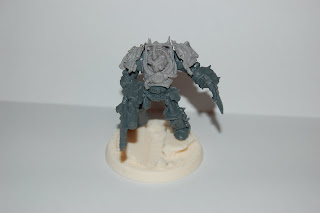 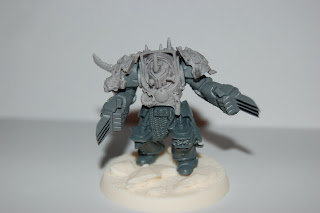 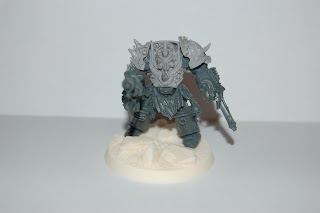 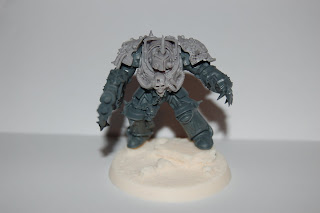 LtoR - Combi Flamer & Chainfist, Heavy Flamer & Powerfist
I'll get these lot sprayed soon and start painting them all, I'll bang some more pictures on when they're further forward.
Enjoy
Luko Dakka
Posted by Luko Dakka at 19:10 No comments: