This is part two of Cloak and Dagger.  Below is the background as written by Trevdog Howler


Finuval Windmaker haughtily looked down his nose at the Imperial emissary as they stood at Marienburg docks.  His fleet was moored up and his fellow countrymen unloaded the shipment of war with customary efficiency.  Fellow soldiers of renown were with him and he relished the chance to strike at his hated cousins.  Even though Doc Grunnson’s Dwarf force was two days march ahead of him, he knew he could catch them up.  Doc Grunnson had said to rendezvous at Dunterswald village.  It was little more than a collection of houses and a farmstead.  He didn’t give Finuval a reason for meeting there apart from his message passed on by the emissary made reference to Skaven and a tunnel network that headed toward the village.  Teclis had ordered him to trust the Dwarfs…… but he couldn’t shift the feeling they would be the death of him……


……..They were making good time and kept the pace high.  Grunnson’s men could keep this up for days, even weeks.  He knew he had to get to Dunterswald before the Skaven.  They were up to something big and bad, so a spy from the hold had reported.  He’d heard the Skaven had been extending their network further north along the border of the Laurelorn forest and into the Wastelands.  The reason why escaped him.  The Clans had been amassing and dire warp engines had been at work deep in their lairs.  The spy had come across several references to a relocation of O J Backstabber’s clan to the Wastelands. A mission was going ahead……..


………”Only eight food stops master!” squealed Gibitt to O J Backstabber who was looming over him brandishing a dirty curved blade.  “Seven, no more!” ordered O J as he sank back down off his tip toes.


If he was ever to get his clan to the meeting with the Dark Elf Things in time he had to be quick quick.


Dragit Red Eye had primed the boy and all was set for his big creation.  His tail swished with excitement.  All he had to do was get to the boy and take it from there……. Admittedly he had bargained with the Dark Elf Witch Thing, Lady Maleficent, to bring his cunning plan together.  She would bring her magic cage and once this first monster was contained another and another and another would be made flesh.  He might let her have one.  Squeek squeek squeek! he sniggered……..

……… a silent black tide rolled off the sea and onto the Wasteland.  Lady Maleficent made an almost unnoticeable signal to her army to send them into the next stage of her plan.  Not far now.  Dark comforting thoughts of what she would do with the Skaven’s monster when it was in her hands gave her a thrill.  O J Backstabber had promised her one when she had performed her part of the bargain.  She hadn’t got to be where she was now by following any bargains to the letter.  She would watch out for OJ.  Meet him at Dunterswald.  Well, there was another threat in the form of her hated High elf cousins following up the coast.  She would warn the Skaven.  Need them on her side at least for now.  Then like a dark shadow the host dispersed into the barren land.

Chewing on his bottom lip he stood in the cold morning light with a pale in
his left hand and his other in his mother's hand as she talked to him on the
front doorstep of their farm house. He wasn't listening. He was more concerned
where his little friend had got to. He hadn't seen him in days. Ma and Pa
thought he had an imaginary friend like Samia's, she lived just past the tower
with her Ma and Pa. But his friend was real. Red Eye said he would be back,
and each time he came back he brought something with him. Just a small thing, a
little green bean. Quite innocuous as they were just beans. But Red Eye was
insistent that Aldred keep them safe in the barn. Big people weren't to know.
Aldred was glad he had saved Red Eye from Scratchy the farm cat around three
full moons ago when the cold was at its most fierce. He had gone to the barn
later that day to see to his surprise Scratchy about to pounce on a big brown
rat that had one black and one red eye. He was sure Scratchy would have ended
Red Eye's life in a flash just like the other rats unfortunate to venture into
the barn when the cat was around.
But a strange thought came to him as he watched the stand off between cat and
rat, and before he knew what he was doing he had a broom in his hand and was
scooting Scratchy off. Stranger still was when Scratchy had gone Red Eye fixed
him with a stare and then uttered words to him…….

Red Eye was distraught one day and Aldred didn't know how to help him. Red
Eye said the beans were under threat from someone, and he wanted Aldred to help
him find a better hiding place for them. Red Eye's words and speech was funny
and sometimes made Aldred laugh. But this time Red Eye was serious. "Friend
friend, come come. You must hide them quick quick. Put them in your stomach,
swallow swallow!!" So Aldred did this for his friend. He only saw Red Eye once
more after that. Moorsleib waxed and waned and on the 13th night Aldred went to
the barn in a midnight sweat and retched up a large dark shinny green bean. He
thought it best to keep it hidden on him until he could tell Red Eye what had
happened. And day after day it grew a little bigger.

"Are you listening to me Aldred? Oh, just go get half a pale of water from
the well. Off you go then."

The cold morning light was still too weak this early to add colour to his
surroundings. He couldn't even see the steam of his breath. At the well he
hooked the pale to the tether of rope below the winch, then he let the weight of
it whirl the handle round until the splash would signal the water below…….. a
dull thud was the signal this time.

"Ma! There's no water in the well!" Aldred cried out.

As the light grew stronger his surroundings became clearer, and he froze as
he saw the movement of many, many figures coming toward Dunterswald and his Pa's
farmstead. 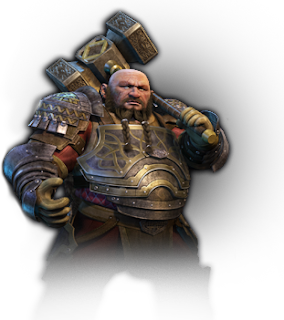 The final part of Cloak and Dagger the report will be published tomorrow!