After a strong start I knew my next opponent would have had an equally strong result in the first round. It turned out to be LUKODAKKA.

This was a close combat knightmare, 2+ saves and power weapons. I knew I had to keep away from him and use my better maneuverability to my advantage.

The mission we got was 6 objectives with different values with the hammer and anvil setup.

This game went to and fro throughout. In my turn I was able to shoot his units and in his turn he assaulted in and got me. Eventually my extra numbers just held out and by turn 5 I had wiped him out. All I had left was khan, 1 biker, and my 2 talons. The result did not show how close the game was.

With 2 wins, both very strong I knew the last game would be against an equally tough opponent and we would be playing for the title!

The game was against Dale. I played him first last year. That was a close game then, as I was losing at the end of turn 5 but luckily it went to turn 7 where I had enough bodies to wipe him out. He was playing a similar lists to last year.

I went first and had a complete blood rush and piled everything forward and shot at the knights......FAIL. Not a wound caused and I ended up wishing charge range of his deadly stuff.
His turn and he assaulted in and wiped out the grav gun squad and khan!
Big trouble!
I needed a rethink of how to get out of this mess. So melta gums turned towards the land raider and blew it sky high. Then everything else focused everything on a knight.
Another stroke of luck this turn was that a strike squad mishapped and were taken by the warp. Less guns to aim at me! The next few turns I was able to take more wounds off the big stuff from shooting and eventually by turn 5 he only had 2 strikes left where I had a few bikes and the talons left.

The game ended with another solid win for me.

3 out of 3 and my title defended 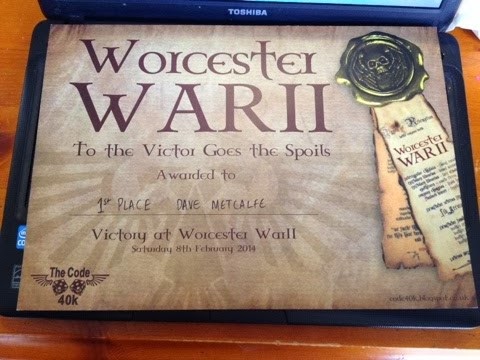 I was impressed with the marine bikes. They had resilience and great firepower. In combat they were very weak even with khan and a librarian. Against the grey knights these 2 guys were unable to cut the mustard.

I do like bikes and they looked great. I still have another full squad to make up.

Up next though I have a few inquisitor retinue models to complete and a new squad of sternguard to paint. I also must crack on and get some scenery done. Paula and mike have inspired me with what they have done for the the event.