Well at last i have finished my 20 Paladins. They were due to be ready for the 1st week in July, so only 4 months late!

here are the last 5 here are some close ups so the next question is what am I up to next? the answer is..... so these were purchased from Hyspaspist before he moved to Canada. i have always like the Ravenwing and i have been on the end of a beating or 2 from them in the past. i think that if i paint the white wings yellow then they should fit neatly into my army colour scheme.

and here is an example i got 4 ravenwing boxes and 2 land speeder typhoons and a master of the ravenwing in a speeder. i also have 8 unbuilt bikes from my previous attempt to start a bike list, and also 6 unbuilt dark vengeance bikes and an unbuilt speeder. i have got another 8-10 bike and an attack bike in a bit of poor condition off eBay. to go with my Heavy Flamer and Multimelta squad 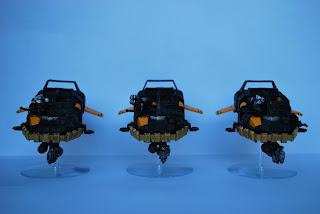 these bad boys have more than made their points back you can also see some of my eBay bike.

I think I also have a spare bike for either a librarian or chaplain.

hopefully my next post won't be so long away.