Good evening all, sorry, it feels like an age since I last posted anything! I've been mooching through some of my recent pictures and I've got so much to update you all with I'm going to break what would be one humongous post post into 3 or 4 posts over the next week or so.
Basically so I don't bore you all to death.
Or wear my fingers out typing forever.
Win win really :)
Anyway, first up shall be a (very) brief review of Warhammer Fest 2016 which I atttended with my good friend Ian last month.
Neither of use were massively enthused to attend this year following a somewhat lack lustre effort on GW's behalf the year prior, but seeing as we were both free on the date and my friend was passing the venue on his way back from a family visit we decided to go along and see what had changed.
We didn't regret the decision at all.
In what appears to be massive change of direction from the GW of old, the entire event seemed to be packed with exactly what was missing from the year before. There were game boards to play on (should you have brought an army..), silver tower trial games being ran, fun 'create a base' timed challenges, many many third party video games being displayed and shown off along with games workshop key staff show casing everything about the hobby and more than happy to spend the time to talk to you about what have been doing or what interested them etc. We must have spent a good 20 minutes chatting with one of the team members responsible for creating all the AWESOME dioramas in the exhibition hall, thoroughly enjoyable talk and a really nice guy who seemed passionate about his job. (Although it must be easy to be passionate about making awesome set ups when the hardest thing you have to do is try and reason to your boss exactly why you want to smash a drop pod into a war lord Titans head....)
Due to some poor information from one of the door staff we missed where exactly we were meant to sign up for the seminars so missed out on the forge world event BUT having opted to view the black library's effort think we actually came away better off for it....great seeing and hearing some of the writers who's works I've been buried in over the last few years and hearing what they are planning next!
Anyway - on a whim I decided to take along 2 minis of mine to try my luck in the golden demon painting competition. I decided to enter Garro, hand of the sigilite (as I though he was probably one of my best) but he was placed in the cabinet alongside a simply much much better Garro haha so that was a bit of a pointless venture and (almost as an after thought) I decided to try my Onagar Dune Walker out as it attracted some nice attention on Facebook. 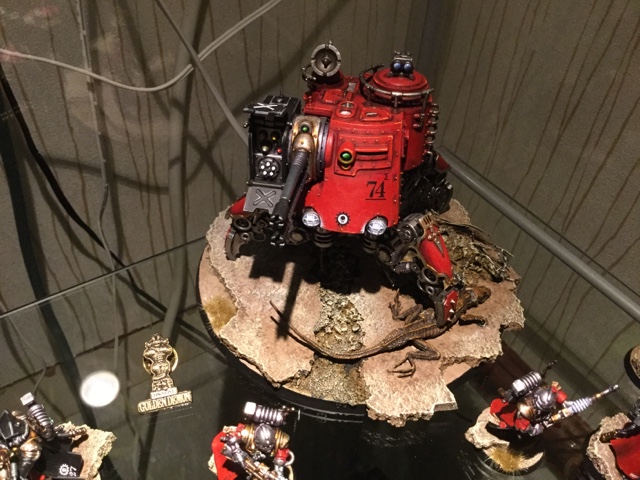 Yup....not sure how exactly, but when I went to collect Garro and the Walker the guy handed me Garro but said
" Sorry buddy, I can't let you have the other model just yet - you've made the finals, congratulations"
Wow, TOTALY stunned that I managed to come away with a Golden Demon finalists pin.....rather a happy boy with that result! Especially to even be considered along side some of the other finalists was an honour, as ever the standard was incredibly high.
Anyway, Warhammer Fest was a triumphant return to form and I'll be 100% in attendance next year (all things wiling ofc) and on that note I'll bid you good night for now - next time I'll get some pics down of my latest little board game purchase 'Kingdom Death' that some of us from the Code managed to sit down and play a few rounds of.
Thanks for reading :) until next time.
Tom
Posted by Unknown at 23:48 3 comments: