Doc here to talk about an event I helped run for Worcester Wargames August Annihilation a 1500pt Swiss System 40k tournament.  This was the first event I had been involved in since 7th came in.  We decided to let everything in and follow the rules laid down by GW.  This meant we had knights, a titan and forgeworld galore.  Overall I think it worked on the whole.  I think the titan is a different matter and maybe still overpowered.  Most of knights across the tables seemed to be handled.

Before I get onto the results I want to talk about the rules pack a little.  Over the years I have tried many different methods of getting a fair overall result.  In this event we used a simple scoring system of 10pts for a win, 3pts for a draw and 0 for a loss.  We then used the total sum of the vp's to decide ties.  As you will see in the results we had a couple of ties which the VP's sorted.  The element that really decided however, was the painting points....


The table above shows the scoring system we used to decide painting points.  Myself and Andy scored every army based on the table above and agreed on every army except one.  An average of the two scores was then added to the players overall score.  This granted up to an extra 5 gamer points meaning players could then score between 0 - 35 pts and then Vp's would be used to decide ties.  I the end the painting points decided the event.  Player 1 and 2 both won all 3 games.  However player 1 scored a 5 for painting and player 2 a 3.  I'm not sure if I am comfortable with painting deciding the event.  It is after all a gaming event not Golden Demon.  On the other hand it is also a major part of the hobby.

Ok on to the final results:

A downloadable version is available here for those who would like to save it for prosperity.  Next I would like to ask some feedback questions and would ask people to comment below their responses?

The 40k event held in Worcester will be our own Worcester War 3 and this post wouldn't be complete without a shameless plug.  If you want to read all about it please go the announcement post here.  I am certainly looking forward to it as I come out from the organisers position to take part. 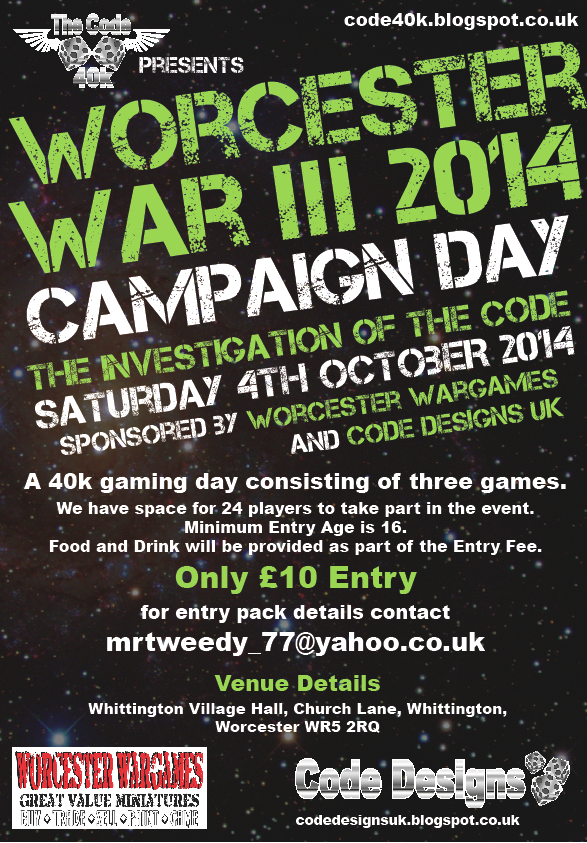 That's all from me folks please comment and help make future events better!