Welcome to my review of the Battlefield Birmingham Doubles Event held at the Cadbury's Club, Birmingham. Saturday 16th and Sunday 17th June 2018.  We went in force with 4 teams from code members taking part.

First off to say this is a gold standard event in my opinion and I will go on to explain why.  Only a couple of minor things could be improved. 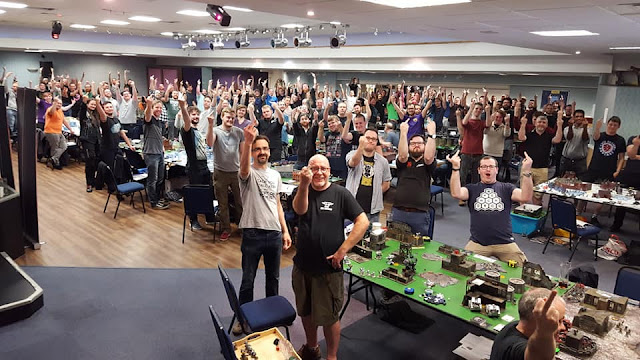 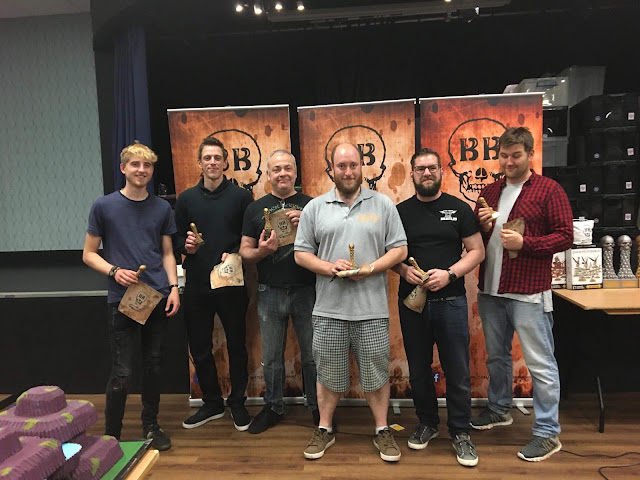 The only success we had as group was Bristles nomination in the best painted category for his Death Korps of Krieg (2nd from the right).  Well done bud and as we played together it was nice to hear the positive feedback he was receiving.

I promised on my last post that I would do a live feed from the event and despite signal issues and battery issues I managed to get round a lot of the armies and the tables.  Check the video out here.

Me and DB had 5 games over the weekend and managed 3 victories, 1 draw and 1 loss and finished up 21st out of 72 teams with our guard combo.  Jack Whitefoot (who makes all the amazing 3d trophies see here) joined Ian with an ork combination and finished 29th.  Innermech and LukoDakka finished 50th with there custodes and primaris marines combination.  Finally Boss Bludtoof and Kelly came in 56th with a marine combination.

On to mine and DB's games:

First off we played Paul and Mark with there Dark Eldar and Necrons combination.  This felt very much like the first game of the world cup and ended up a total stale mate at 12vps each top fellas and me and DB learnt a lot about positioning, playing together etc.  The spirit of this game was immense and that continued throughout the weekend. 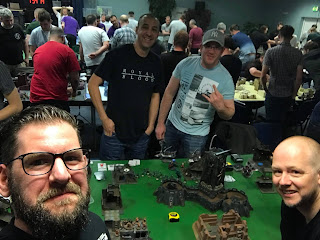 Unfortunately we dont have a picture for game 2 but it was against Steve and Mike's necrons including a healthy dose of forgeworld necrons.  Both the tesseract arc and anthracites were lethal with DB's super heavy Macharius (below) biting the dust turn one.  This game quickly became a play the mission game and we came out with a close 18 to 13 victory point win. 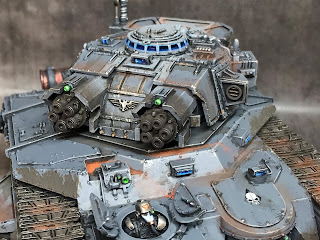 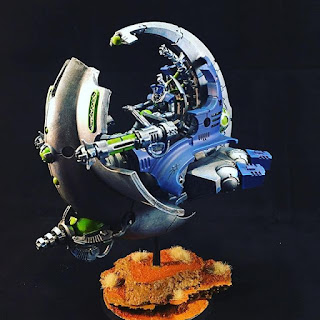 For the 3rd game we were up against Miles and Chris running Dark Eldar and Nids  This game seemly went well from the off for us but Miles and Chris stayed in there scoring healthy points themselves.  The armigers played a particularly strong game but I thought the main issue for our opponents was our ability to pick on elements on their army at a time as they had a lot in reserve or out of threat range.  DB's re roll buffs also helped.  Overall we ended up with a narrow 13pts to 8pts victory. 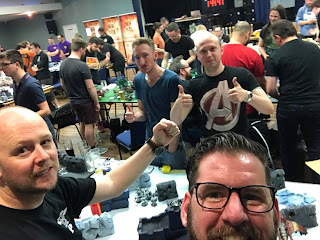 By this game we had risen up the table a little and knew we would be facing a tougher test and along cam Dave and Chris.  Space Wolves and Custodes.  All of the space wolves in particular were really well painted and should of been in the best painted category in my opinion.  They had a lot of shield dreads and I forgot the heroic intervention rule meaning Bjorn and mates could counter charge me when I charged one of my armigers in.  This lost one with very little damage.  From very early on it became clear we had to dig deep and play the mission.  DB was being attacked in force by the dreads and I ended having to leave him to it whilst I tried to claim the main objectives.  It came down to the last turn where everything fell apart losing our home objective and their home objective creating a massive vp swing.   Never mind it was a great game and they were both a laugh!  Final score we lost 33vps to 15vps. 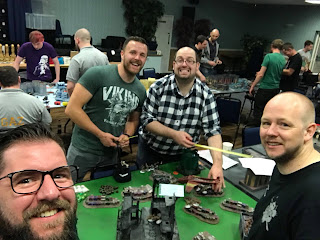 On to the last game and everybody is knackered but once again we had fun.  We took on Steve and Marks blood angel combination and this was a real attack versus defence game with the blood angels hunting us in packs.  For this game I made an obscene amount of 5 ups on the armigers and ended feeling sorry for our opponents.  They were great sports mind you.  Also watch out for descent of angels stratagems on hammer wielding heroes (great tactic).  We also had a great card draw and scored a mass of maelstrom points in this game even with a solid end to the game the blood angels were out pointed 24vps to 14vps for another win. 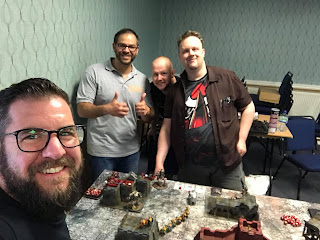 Overall such a great time with all the games played in the right spirit.  My unit of the weekend goes to my Armigers.  Here is a photo on one of them in my new photo booth!  So tick..... another thing I promised in the last post. 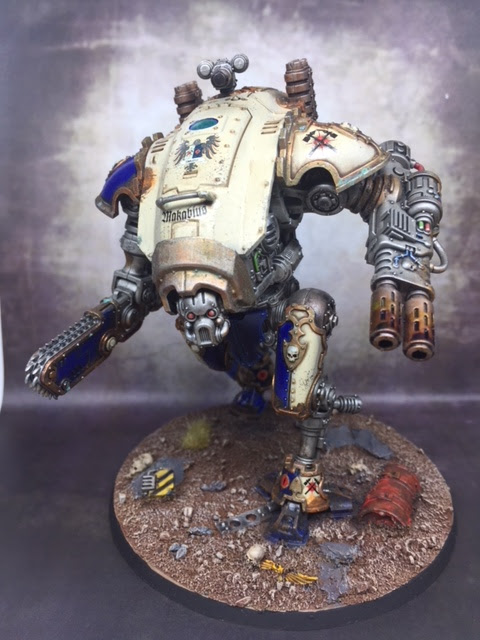 Below are all the entrants bar one who forget to set up their army until the last second.  The first army the Dark Eldar was the eventual winner and was great looking.  This is always one of my favourite parts of the weekend and arguably the most subjective.  The system used was to allow the organisers to choose the finalist for the best painted.  I would of used the first lunch period to have a vote for the finalists with the final vote on the second day. 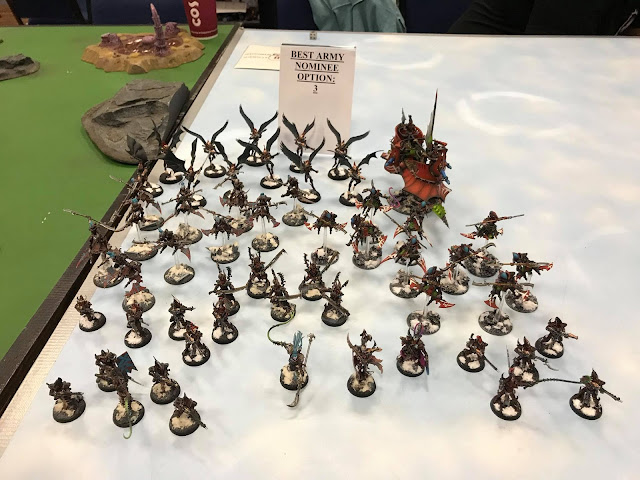 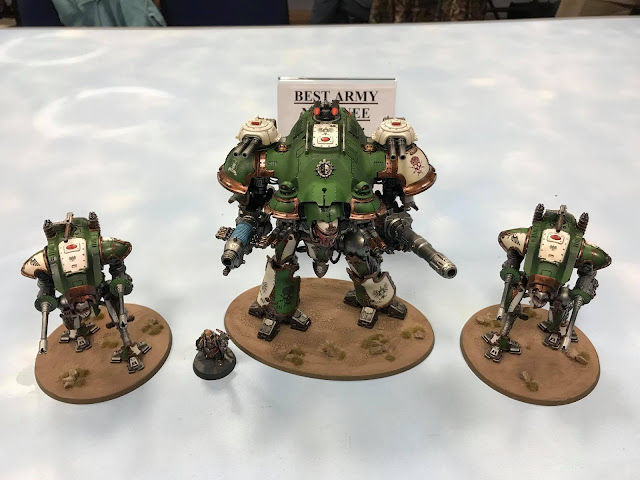 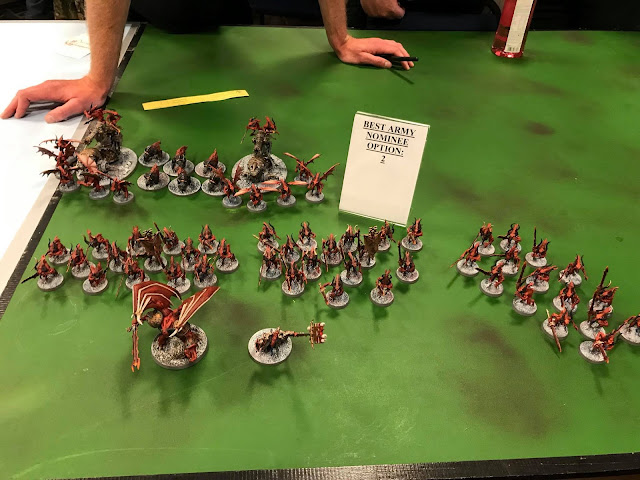 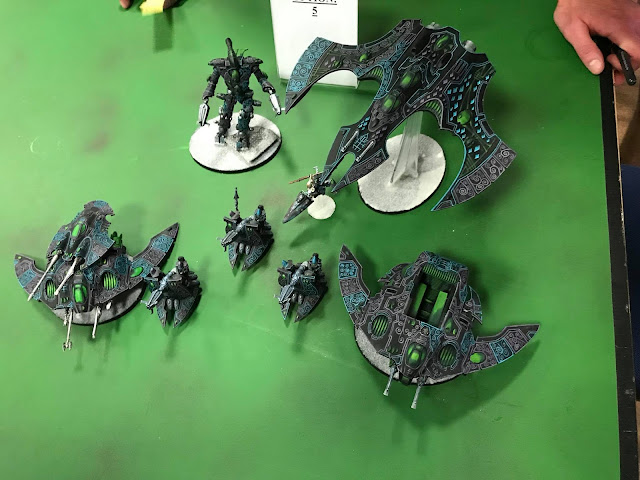 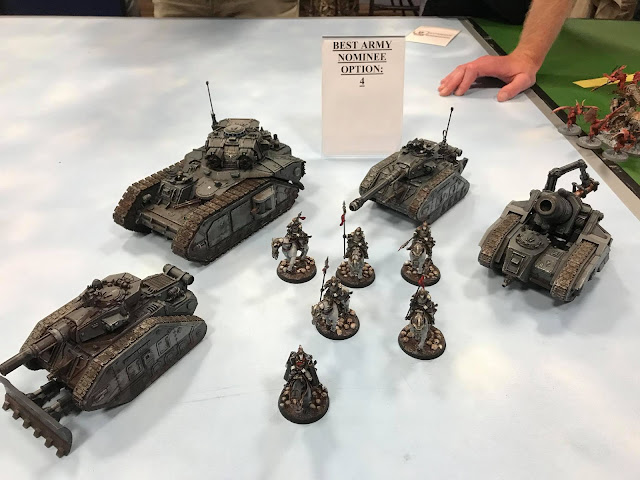 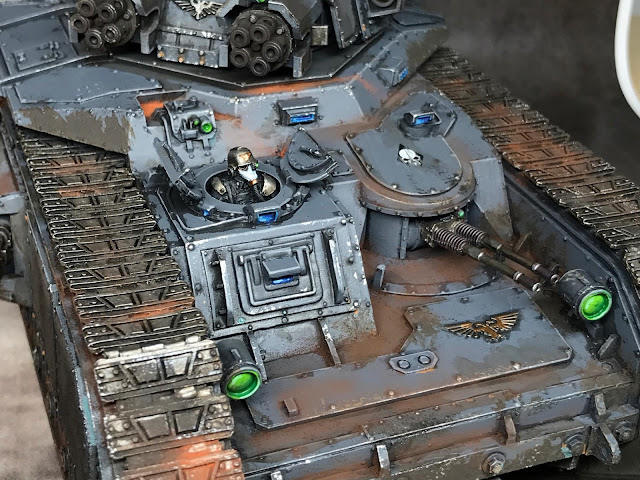 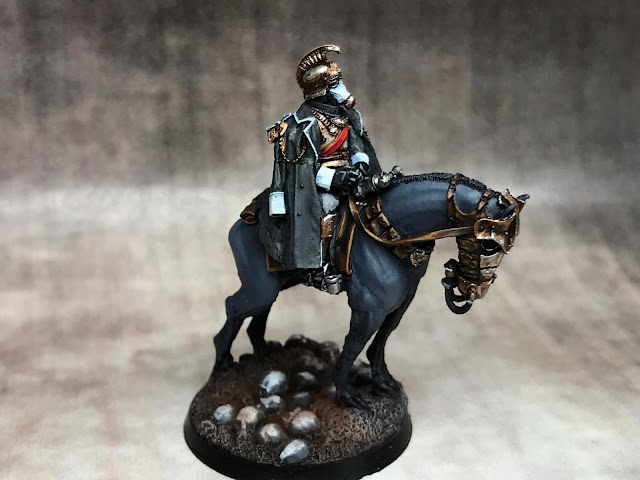 Almost everything I had a great time but for clarity: SCENERY, VENUE, PRIZE SUPPORT, BAR!!!, ATMOSPHERE, ORGANISATION, GREAT COMMUNICATION, TIME WITH FRIENDS

Not much but at a pinch; Best painted arrangements, No published painting results or best sportsman.  There was a hint of the potential for a large group to have bought the best sportsman prize via internal voting.  I hope not  and I don't know if this is the case as that could of been removed by only allowing players to vote for people they have played during the weekend.

To end my review, this a gold standard event and I would definitely like to attend next year, thanks to DB for partnering me and thanks to all the great folk we shared the battlefield with.

The night before the action begins and I am aware I haven't blogged again despite promises but never mind it is only a blog right?

Anyways the good news is I have 4 or 5 strong articles in my head which I really want to take a stab at writing.  Incidentally a couple of those are showcases but also want to put my thoughts down on Horus Heresy, Conventions and Tournaments.  I also have another using the interwebs article in mind.  Alongside this I have recently run some new photo backdrops so expect a change there along with some higher quality photos on the blog.

Despite no activity here I have been painting and the really beady eyed might of spotted Doc's Painting Points 2018 has been getting updated (see the sidebar of the web version of the blog).  This is always updated quickly after I complete a mini and has become a ritual.

My idea for this weekend all being well is to run round Battlefield Birmingham on a live feed over the weekend on our facebook page www.facebook.com/code40k.  Hopefully I can capture some beautiful minis!

I will leave you with this group shot of my army for the weekend and a couple of extra plasma wielding guardsmen I painted for the event. 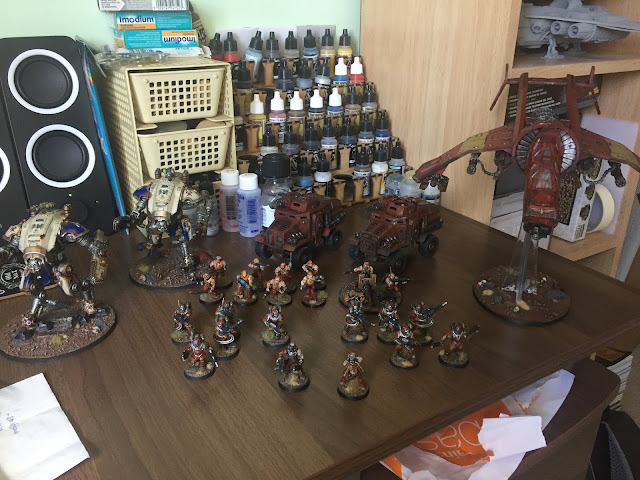 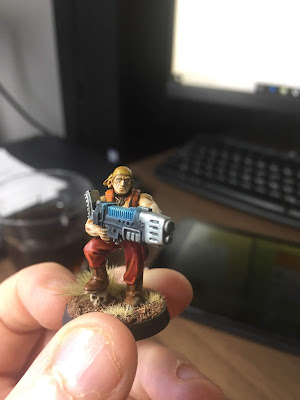 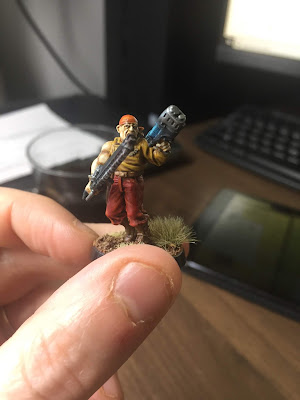 Have a good weekend all