Here is some more pictures of my Mek Workshop WIP, First two are before i coated up the foamboard and base. 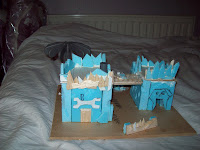 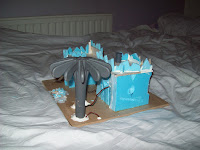 The next two are after coating... 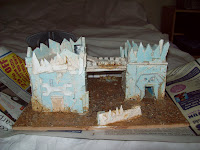 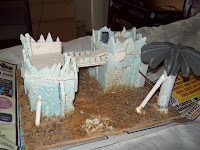 More updates coming soon, if anyone is wondering the turbine is a potato masher called a spudnik which my wife didn't like so i put it to good use!

Hi all, A pic fest for you first off my completed rock surrounded building... 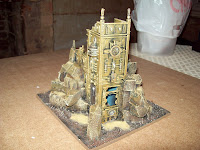 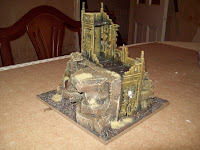 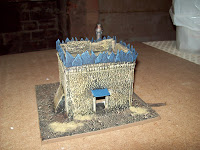 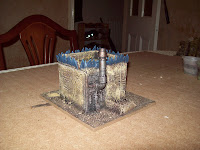 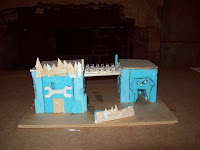 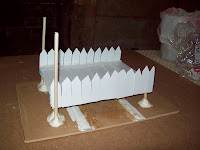 As you can see we are going to a lot of effort to get some new terrain together for this game. Hope you like it? More pics of work in progress to come soon. 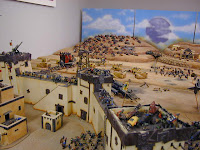 The code40K players have decided to play a game based loosely on the 'Big Tooth River' display from Games Day '97 on the 19th June'10. 10,000 pts a side The Waagh vs The Guard (sadly no Pretorians). Three problems we dont have a river, any orky buildings and any desert terrain. That means i get to work on the best part of the hobby for the next few weeks. Here is the picture of my first new building WIP. 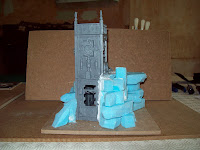 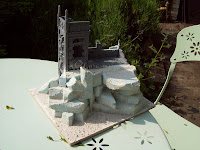 The great thing about building the river is it's been an objective of mine for years. Expect pictures of the river soon and a kick ass bridge made in conjunction with Luko Dakka.

As promised ill talk about game 2 from my SVAX weekend....

As continued the theme this weekend Larry's Eldar were another beautifully painted army and nominated for the best painted award along with my first opponent. 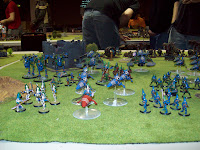 As stated before my camera isn't the best but you can still get the idea how nice the eldar looked!

So the first thing Larry did is ask me if i wanted a drink so off we trundled to the bar. Thanks very much. The game itself was typical game against the eldar. One word describes it cagey. We, as always in capture and control had two objectives one in each deployment zone, but the boys from spikey had placed an additional bonus objective on the board. So unusually in an objective game i went first i placed my objective near the bonus objective giving me one point to defend instead of two and making it harder for my opponent. This defensive point was also in a building. So from this solid base i set out to try and attack Larry's objective which as it became apparent was difficult with the eldar popping around my flanks and shooting at the vinidacators side armour. The other problem which we didnt realise until it was too late is we played slow. Larry was a top guy and we got distracted talking all things 40K.

As we got to turn 3 as is usual in a capture and control we had Mexican stand off that is... until I got a good round of shooting off against the guardians and war walkers holding his objective removing most of these squads i sent in the fenrisian wolves (which all weekend long caught people out with how quick they move). This cleared his objective meaning i was now a winning position.

In to turn 4 (the last turn as we were slow) and i was undone by the classic eldar move meaning the eldar swooped the Jetbikes in and contested my objective making it a draw! Well as you noticed above i chose to go first which is unusual in an objective game and i nearly beat the eldar. As we always say, "just 1 more turn!"

The bonus objective was mine however, as there was no contesting on these objectives simply closest model claims it and i had surrounded it! This gained my team money to spend on upgrades for the forthcoming game.

Hope you enjoyed my Report?
DOC
Posted by DOC at 09:07 No comments: