Doc here to showcase my pair of Imperial Knight Armigers.  Love these figures and so pleased with the outcome.  In a copy of Boss Bludtoofs format I will do the showcase pictures first followed by some WIP shots.

I have decided to stick to the pre hersey Makabius colour scheme so they match my Acheron Knight.  Eventually I will move to the option to play a full knight army with a lancer and gallant squirrelled away still to be built.

The other reason I am happy with these is I am going further into a model before coming away from the airbrush.  I started just priming with the airbrush.  For these models I put first layers down on all the metal, metallic blue and cream.  Then I braved painting the feet and exhaust vents without masking and was pleased to find out my aim and skills allowed that to work.

I am also pleased with the basic conversion work to increase the movement in the poses and the raiding of the bits box bases have worked well also.  Right DOC enough waffle show us the minis! 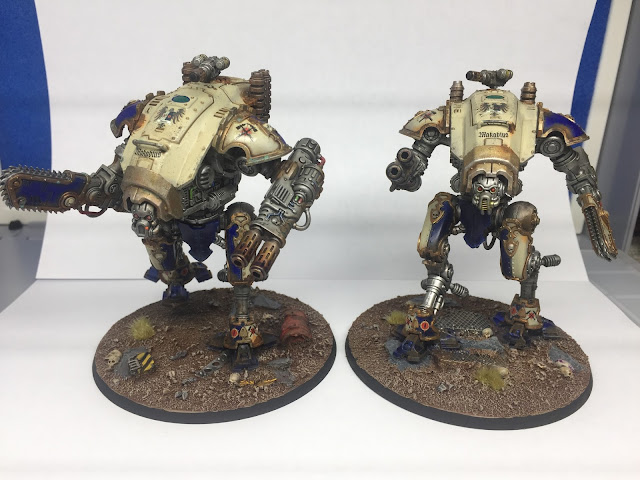 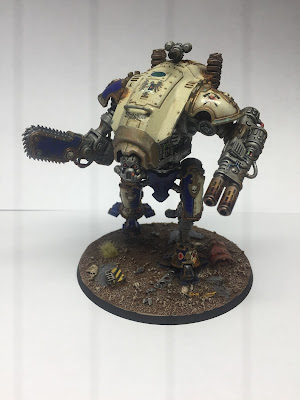 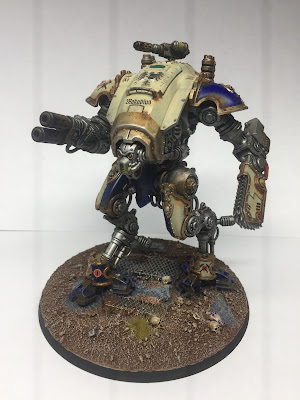 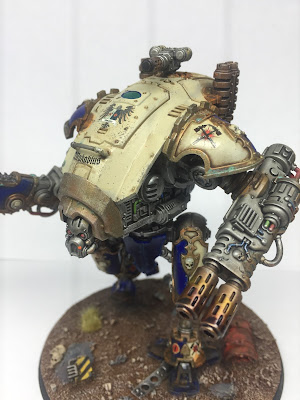 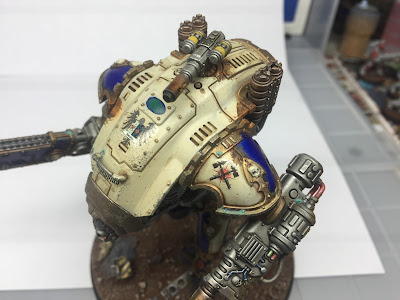 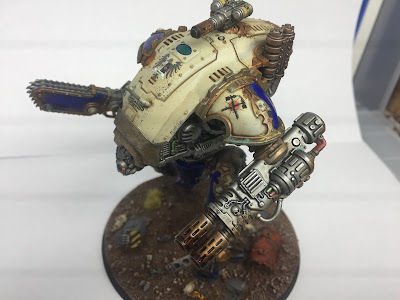 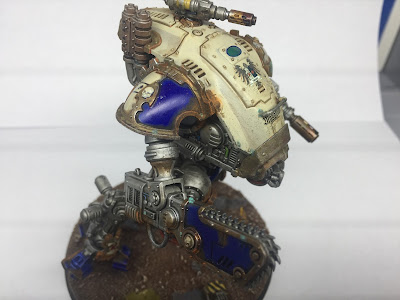 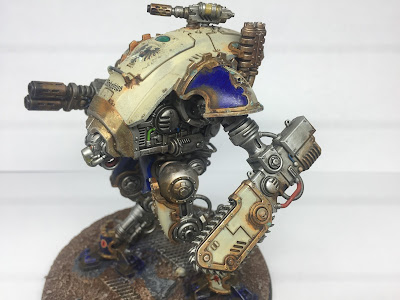 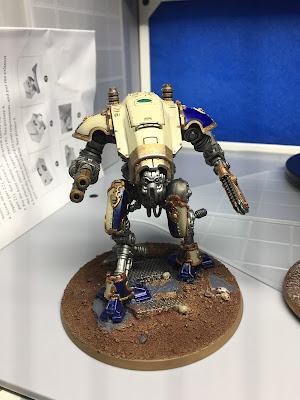 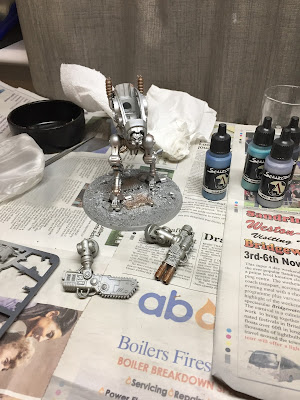 Any constructive feedback is welcome.  I now have 6 Scions and 1 vulture left to complete before mid June Battlefield Birmingham event.

Further Build Progress for the Cypra Incident and Battlefield Birmingham

Bit of a long time since any of us have blogged.  I know there is frantic work going on for for Golden Demon, Battlefield Birmingham and in mine and Boss's case The Cypra Incident.  For me its finding time to sit in front of the keyboard and share the progress which is challenging!

Anyway......  I promised last time to share the next BIG build project so here it is a massive treat to myself a while back 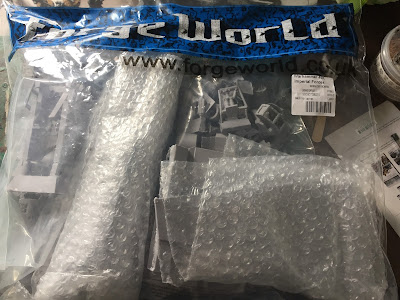 What's that you ask? 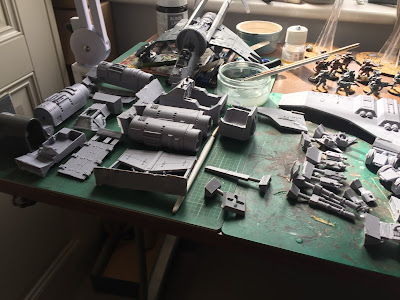 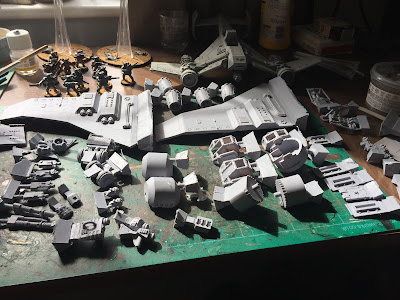 So daunting at the beginning.. 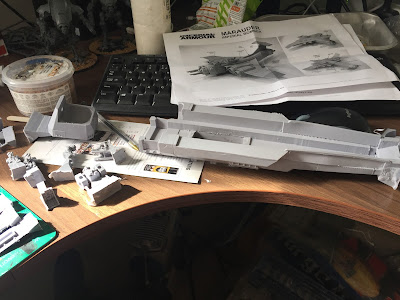 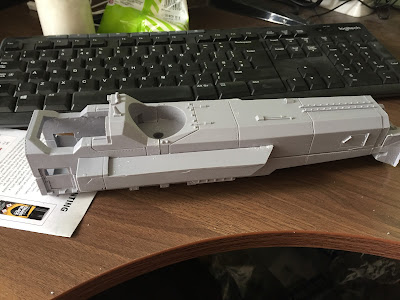 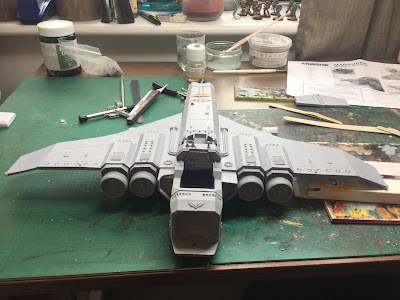 The beast appears (Maraunder Bomber) after several hours work spread across multiple days.  Love the model hard work to put together.  None of the turrets are glued in this picture to aid the painting process. 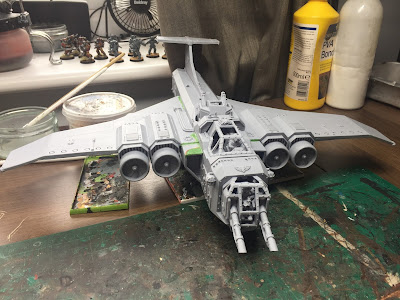 I then felt the need to do a size comparison!  In mind its the ultimate super heavy flyer and will see its first action in the next cypra 'airfield mission'. 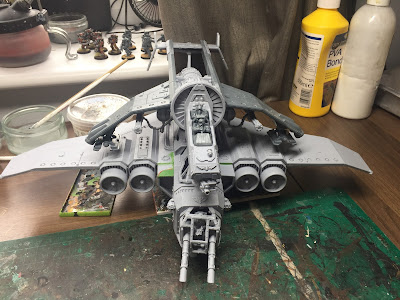 This means I have now concluded the build work for the next cypra mission.  However at this stage I still wanted to build something for my proposed Battlefield Birmingham list. 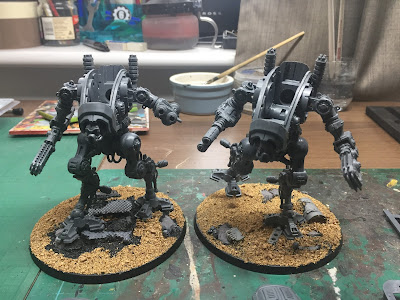 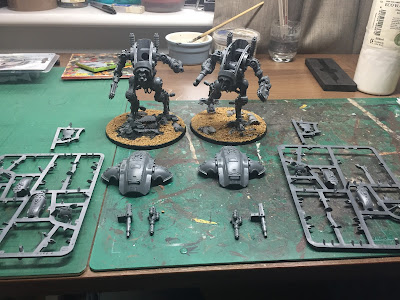 So with the advent of Forgebane and the new mini knights (armigers) I loved them.  Also as a necron player it added to that force also.  I was keen to get some movement into the poses and decided to make one running.  The 14" move rule prompted the posing in my head.  Also decided to make then have opposite weapon arms to each other for further variety.

The next job was a mega airbrush priming session! 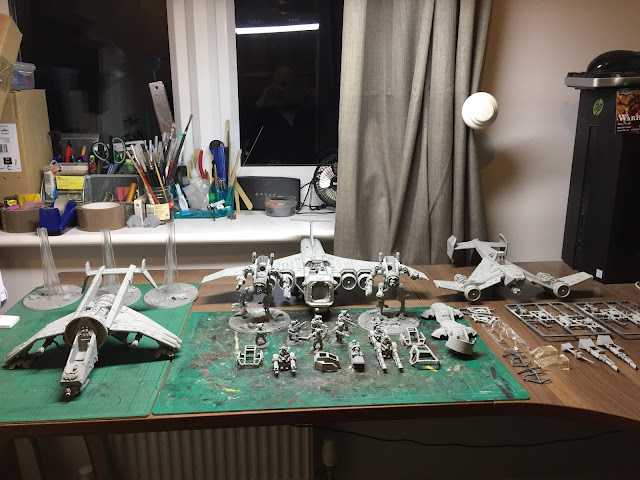 Was super proud to have got to this stage and then a day later realisation that's a lot to paint!  Priority will be the units for Battlefield Birmingham the knights, vulture and scions.

Until next time when hopefully I will be showing you some painted minis or at minimum WIP.