What a weekend....... Fantastic I really cant believe I (and in LukoDakka's case) we havent tried this kind of thing before. I have no doubt all the guys from the code will post up their thoughts on the weekend's action.

Anyway before i begin to go on about how the weekend went for me the final results are here
http://www.spikyclub.com/e107/page.php?29

Ive also decided that my camera is frankly at best rubbish at worst........ So i took a shed load of photos and most are unusable. A new camera maybe in order for this blogging malarky!

Right as i dont want this to be the longest post ever written (not likely) ill talk about my first game.

First off Simon's army absolutely blew me away (not literally in gaming terms) with the standard of the painting the thought behind the background, the conversions and the clever use of epic models. 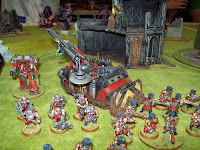 This army was cleary picked purely by theme and indeed if you have already read the results (link above) then you will know he won best painted army! Fair play and well deserved.

Earthfall is basically a planet strike mission with one objective to defend. I defended and Simon attacked sort of.... To be fair i can sum this game by producing a list of the spectacular dice show that we had in turn 2, here goes....

Grand Master had to make 4 standard terminator armour saves he proceeded to roll all 1's.

I say, "ill just shoot my assault cannon at the land raider to get it out of the way before i assault it" (Oh i definately got it out of the way) 3 hits produce one 6 in the penetration roll rolling an additional 6 for the D3 extra and then rolling a 6for damage.

I shoot 2 krak missile's at his dreadnought producing 1 hit followed by a 6 for penetration and then another 6 for damage.

I wasnt immune to the bad luck though either i made 5 armour saves on the long fangs from a round of shooting failing them all!

Sometimes its truly amazing what 40K can throw up and im not sure ill forget that turn for a very long time! As for the result it was pretty difficult for Simon to come back from that position after turn 2 and i got a victory in the first game hoorah! Simon and me laughed hard with this game. He was a top bloke and deserved his best painted army award. So here's another pic! 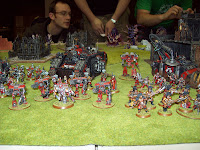 OK the last day before SVAX. Here is the picture of the dreadnought finished as promised. Not the greatest paint job as i rushed it a little as I helped out Luko Dakka with a few orksies. Here therfore is the Burna Boyz which i got given at 2pm this afternoon and they weren't even undercoated. They are needed for SVAX tommorow. What do you think of my speed paint job? 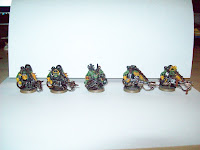 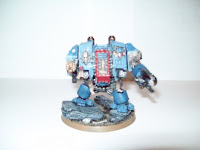 Stuff I Painted This Week

Hi everyone, a goatbay esq post today this is what ive painted this week. 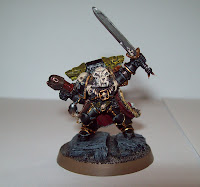 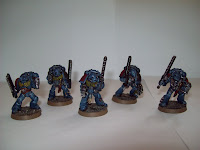 Long Fangs, Yes they are the ancient models. Ive had them since i was at school and just painted them 15 years later! 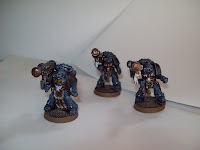 There is 3 days left to SVAX and we are all painting like crazy. Ive have but one model left to paint a dreadnought which im about a third of the way through with. Ill post a completed picture of him on Friday. I also intend to report back from SVAX and how it all went watch this space.

SOme Trukks for your perusal!

The First Trukk is a GW Kit inherited from a friend. The 2nd is a complete Scratchbuild in all it's glory :)

Thanks to a close Eldar loving friend for helping my paintload out with these babies! 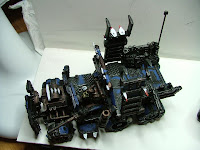 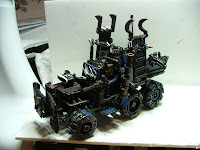 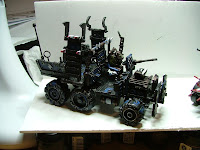 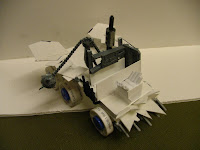 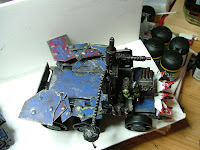 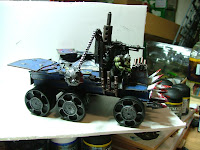 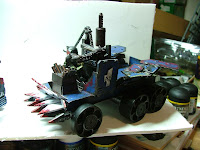 Tomorrow is the Due Date for Deff Kopta Completion (all 6!)

Okay, a Fly-by posting for now, with more to come tomorrow.

To date I have only 6 Deffkoptaz, Big Mek Stompnutz (Shokk Attack Gun), Big Mek Flashbitz (Kustom Force Field) and some Trukks (Kindly being prepped by a Slaaneshi friend of mine), to do.

so after a game at the weekend where the Deff Dread got a serious kicking, I decided that He needed to be next under the brush as he clearly wasn't Blue enough!

so without too much pomp please see Da Deffila Krusha!! (and his little Killa Kan Buddies! 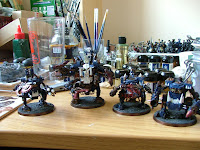 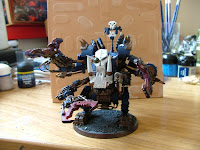 I also did some Boyz* last week... 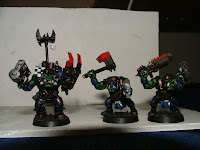 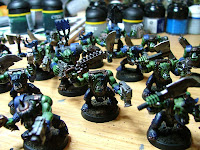 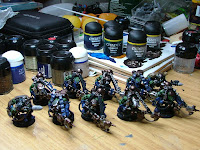 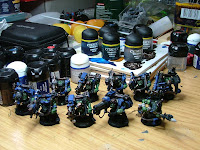 Lots of blue there, if there are any close ups required let me know via response!
Otherwise, expect to see more updates as The Tournament on Saturday looms!
Posted by Hypaspist at 19:11 1 comment: 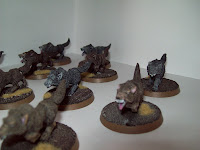 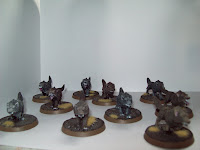 Hot off the press, newly painted wolves. With just 9 days to go to SVAX its all hands to the painting pump. Watch out for new stuff from me, hypasist and lukodakka.

This week and Last I have been working on a Boomwagon and Some Kans..


Here are my results! 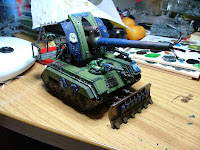 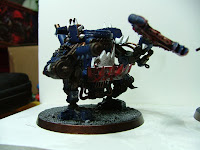 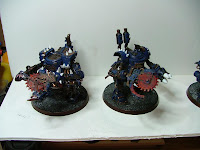 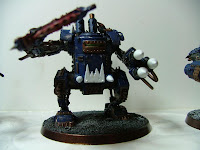 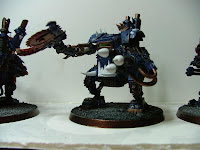 So.
I am aware that these probably need more work, I am neither the bestest nor the fastest of painters ;)
However I am on a tight schedule for SVA X and I need to make sure everytything is tabletop standard!

If I am being honest I would quite like to get some edging work on all the blue sections of these Kans as well as get some rusting on the brazen brass sections to show copper discolouration, however, if I have time to come back to these then I will definitely do that!

I now have my Kans, and my Boomwagon done then, and next week I am looking forward to a week off, so this should allow me to tackle some rank and file boyz!!!

Thanks for looking :D
Posted by Hypaspist at 23:22 No comments: