A quick update on my progress with my Imperial Knight Freeblade. I've made quite good progress this week and the legs and base are almost complete.
Here's a few pics.... 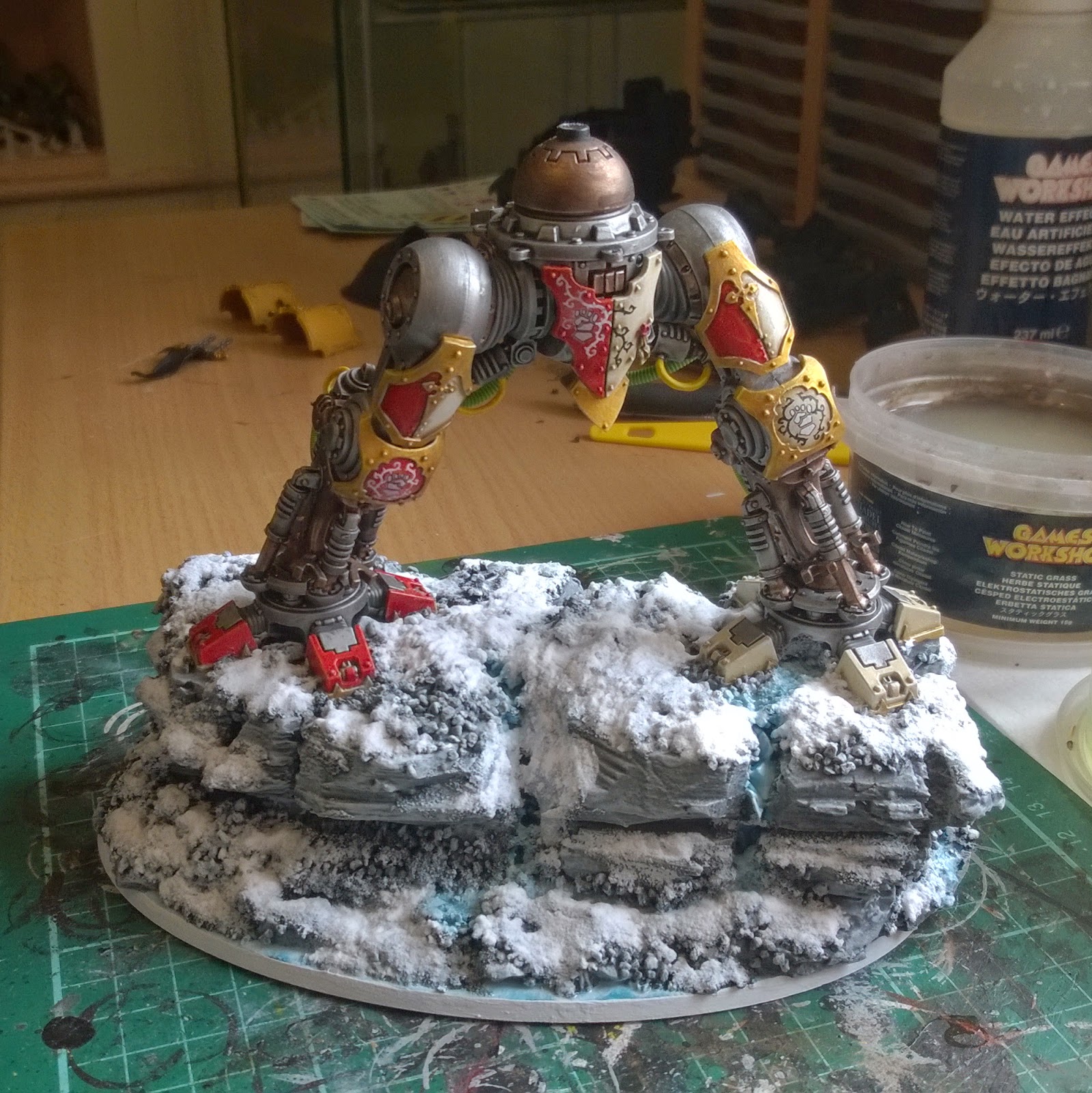 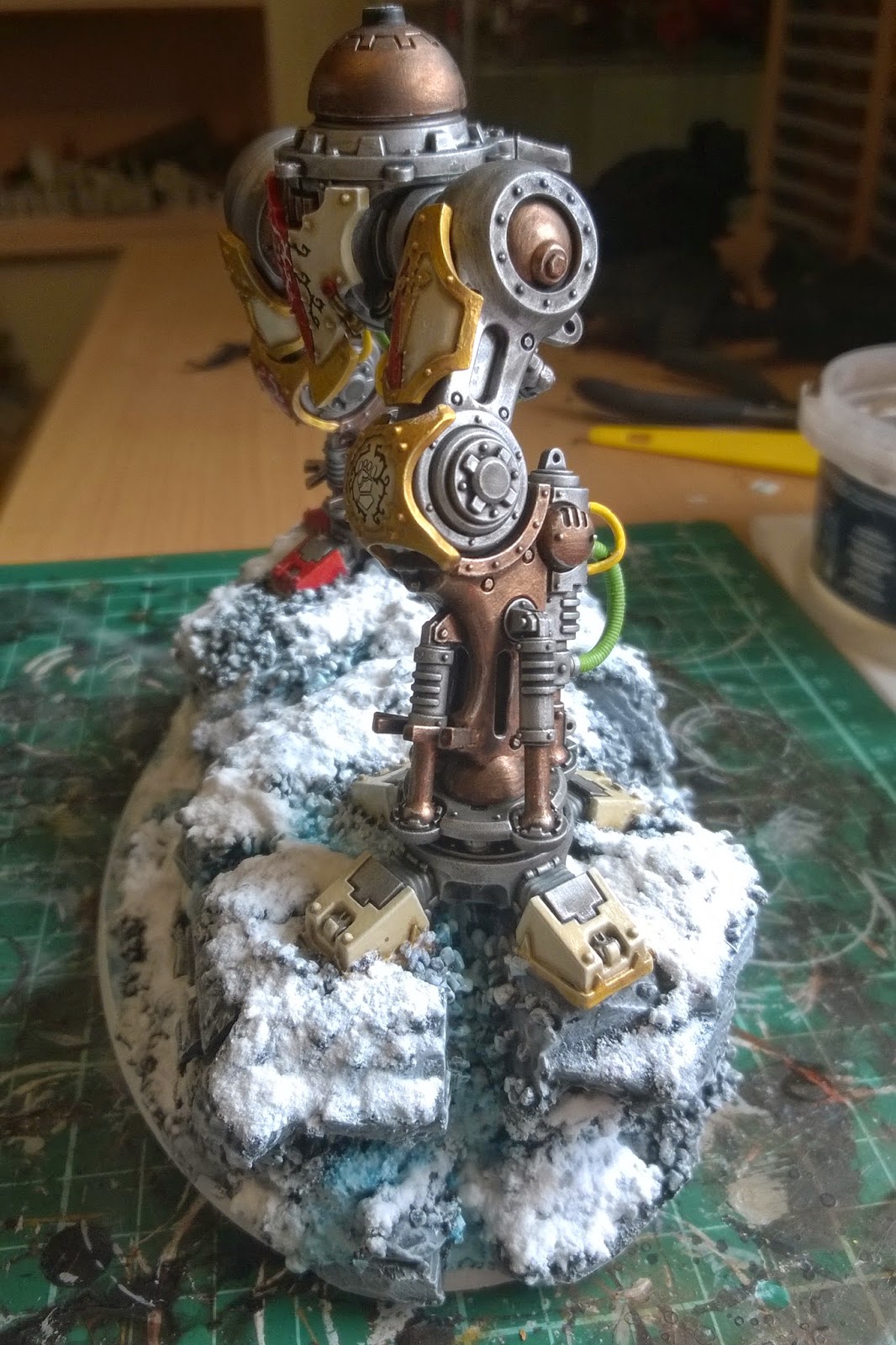 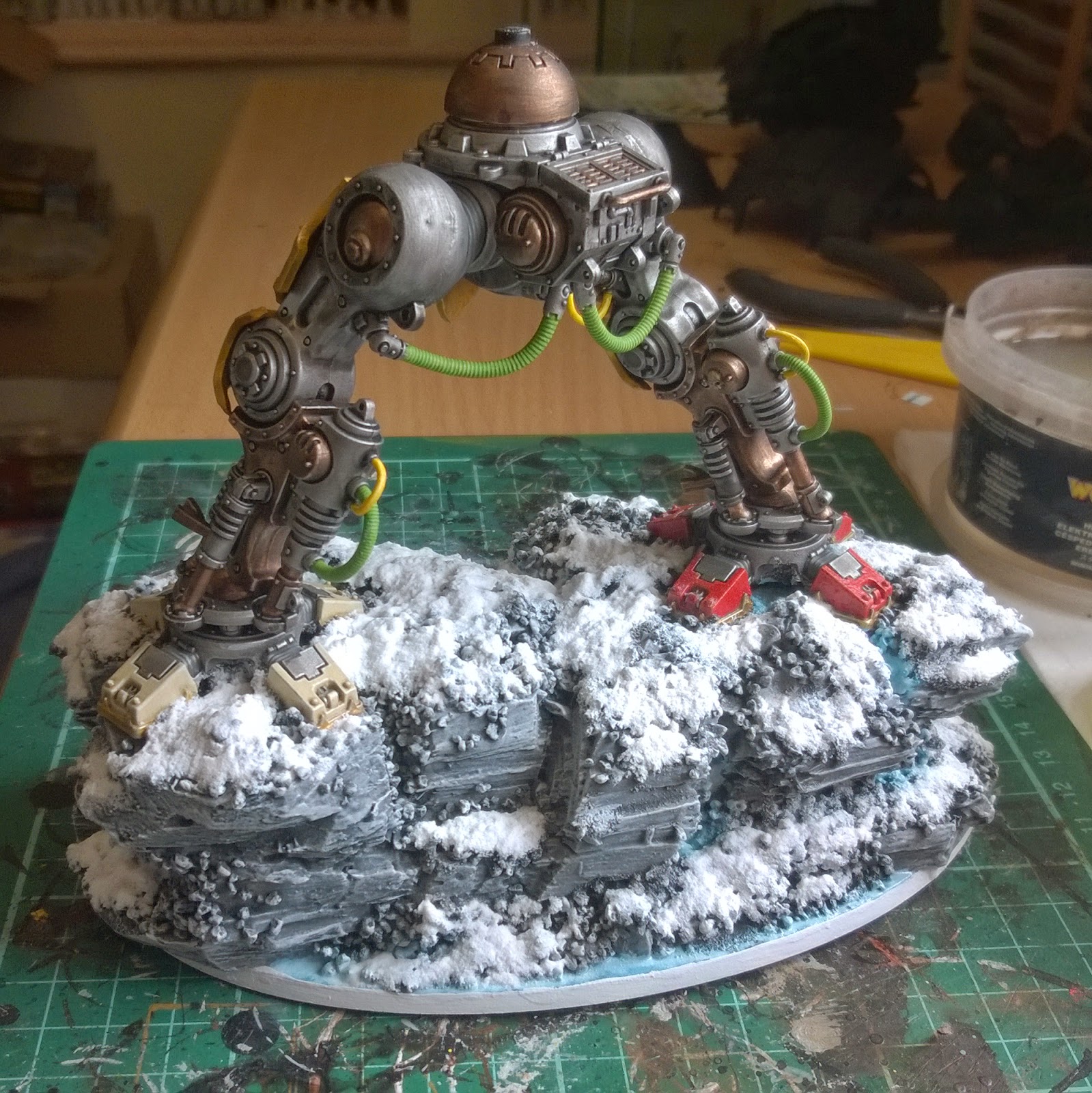 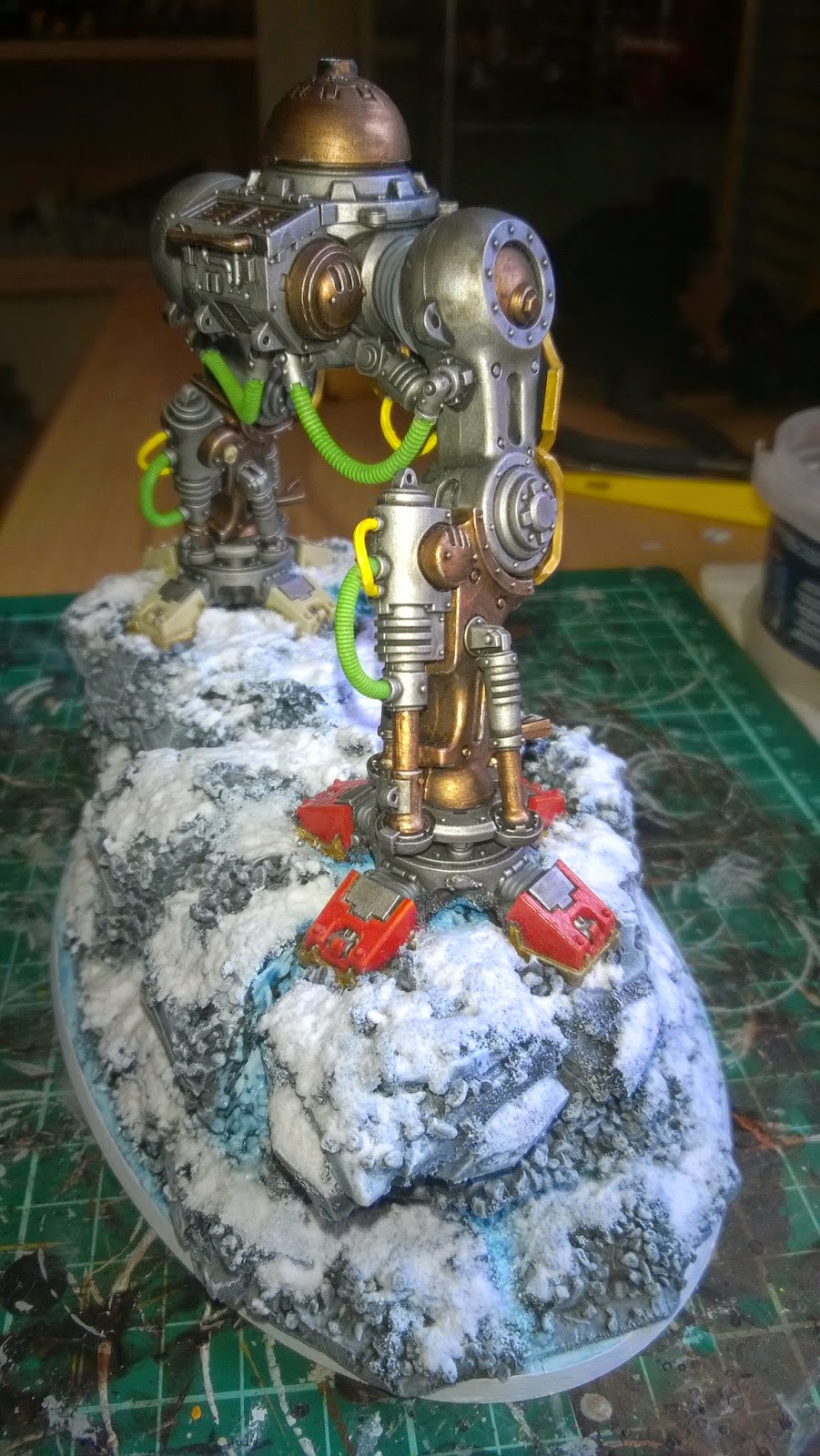 As you can see the base is now done, the rocks were painted in a dark grey base and washed black then dry brushed with a series of lighter greys up to a final very light brush of white. I've tried to create a few rivulets of frozen ice and water trickling between the rocks; these were initially painted in a pale blue and then highlighted right through to white, they were then gloss varnished.
The snowy areas were first painted white, quite roughly, just to give a good base of colour, I've found that putting snow flock on top of a non white base gives it a dirty grey look. The snow itself is bicarbonate of soda. This is the first time I've used it instead of white flock and I have to say I prefer it, I think it gives a more powdery look, it was simply sprinkled generously over a thinned coat of pva glue and left to dry. The excess was harder to get rid of than snow flock.
I wasn't happy at this point though with the icy trickles, they weren't shiny enough so I decided to use a little water effects on them......this was almost a terrible mistake as I hadn't taken into account the bicarb! It reacts with water (and other liquids) the base went a bit frothy as bubbles appeared all around the edges of the "water"! Thankfully they did dissipate with a little help, next time I'll use the water effects before the bicarb!

Here's a close up of the heraldry I've gone for.... 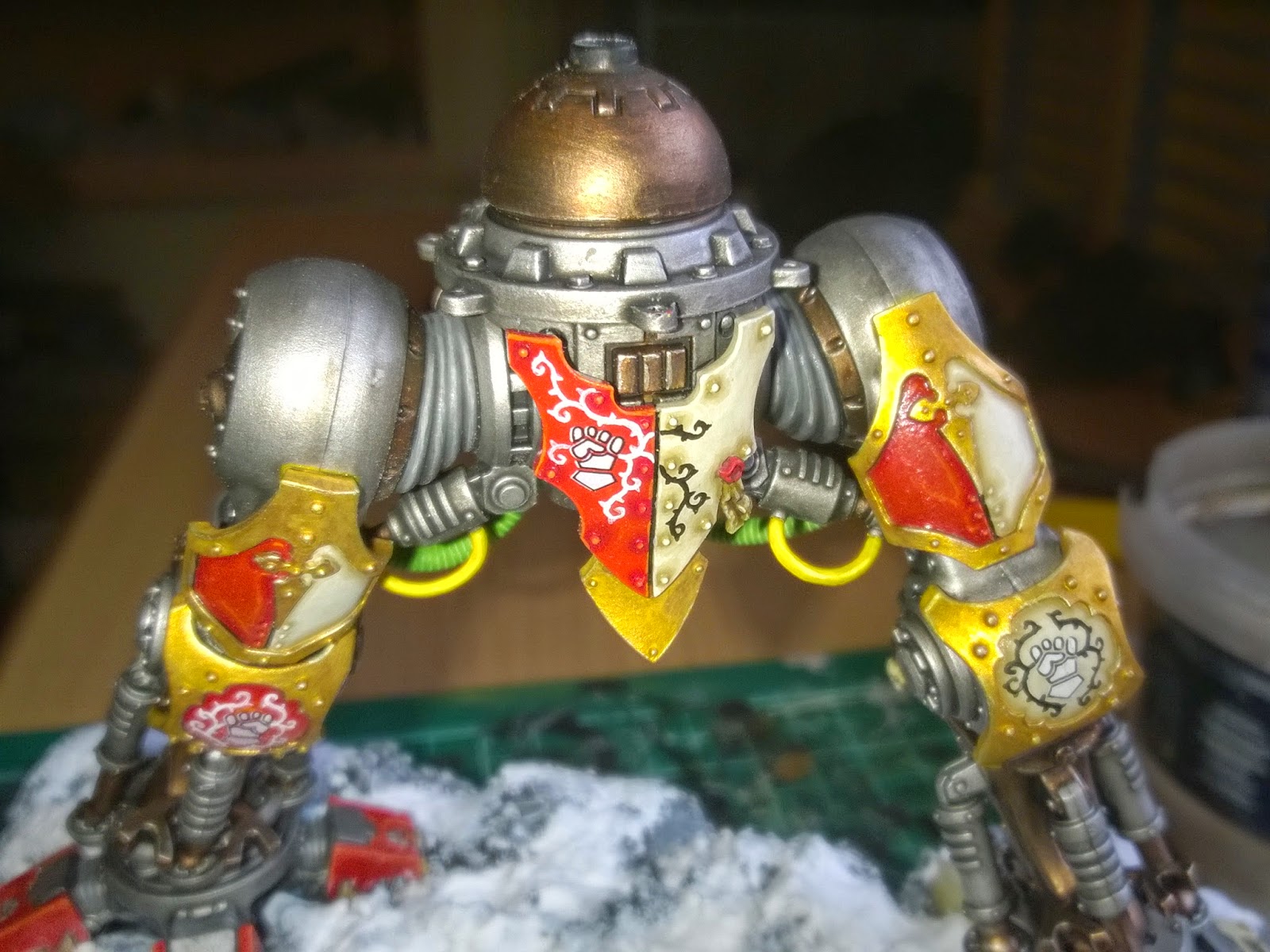 As you can see it's a mix of transfers and freehand vines, I'm pleased though it's a shame about the quality of printing on some of the fist transfers. Each example of thee heraldry will be slightly different depending on the area of the model it appears on. The plates were given a gloss varnish before applying the transfers so as to give a better fix and reduce the noticeable shine common with transfers.

I'm leaving the weathering to the very end once it's all done and put together so I can weather the model as a whole. That will be a first for me too as I don't usually go in for weathering. I'll be experimenting with weathering powders so any hints or tips will be most welcome.

Hope you like it so far, feedback is as ever welcome. I'm currently working on the 2 shin guards and a tattered crotch banner I've made from green stuff (you can see them in the background of the first shot). More pics to come soon......